BERLINER TAGESZEITUNG reports in four languages around the clock 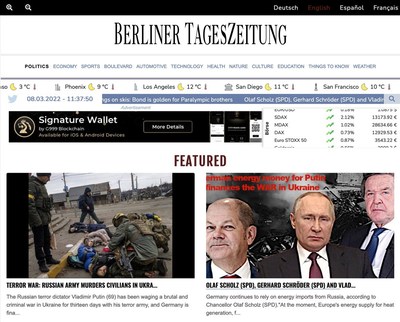 The BERLINER TAGESZEITUNG reports economically and politically independently on all relevant topics and events from politics, business, science, sports, culture, tabloids, media, internet and entertainment. Editorial reports are also sourced through press agencies, among others. BERLINER TAGESZEITUNG bases its reporting on the established practice of the German Press Council, as well as the European Union, and is committed to objectivity, truthfulness and quality journalism to the highest degree.

A unique concept of programming in combination with large server banks at decentralised locations ensures the technical implementation. The number of economically independent units competing with each other is small in the Federal Republic of Germany, because the few large newspaper publishers in particular own many newspapers and publishing units. In this context, the BERLINER TAGESZEITUNG is independent and operates in a group with other publications, such as the DEUTSCHE TAGESZEITUNG, among others.

In absolute contrast to other daily newspapers in Germany, there is no need to take out a subscription with the BERLINER TAGESZEITUNG aktuell and you are still supplied with all the news online around the clock.

The BERLINER TAGESZEITUNG is a liberal-conservative daily newspaper. The line of the newspaper is not determined by an editor-in-chief, but by the editors and the owner, as is usual with newspapers and publications worldwide.