SHENZHEN, China, Aug. 10, 2021 /PRNewswire/ — Working in partnership with 13 of the world’s most forward- thinking game developers, Huawei launched its inaugural Game Fest campaign to inspire AppGallery users to explore a new generation of play on the platform. The campaign ran for six weeks in total, spanning 12 markets globally. 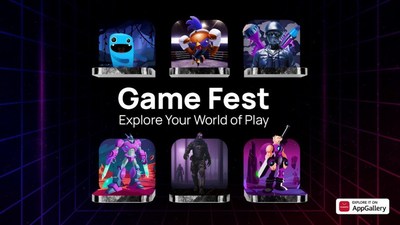 In addition to generating almost a billion in global PR reach for partners, Game Fest generated more than 600 million digital impressions for the titles and a 90% increase in average daily downloads. Demonstrating the power of AppGallery’s wide-reaching audience, the results showcased an increase in total average daily downloads both during the campaign and for the 6-week period post-campaign compared to pre-campaign figures.

The launch of Game Fest demonstrated AppGallery’s commitment to the success of its partners and reinforced its standing as a platform that offers unwavering and full-spectrum support to developers. This support includes providing high touch, locally tailored technical, business development and growth marketing services to help maximize their success on the platform.

Ilya Fedotov, Head of Global Partnerships & Eco-Development Communication, Huawei CBG, added: “AppGallery seeks to be the definitive app marketplace that offers consumers more choice and provides developers with the innovative technology they need to imagine new possibilities. Encouraged by the overwhelmingly positive results of Game Fest, we will continue to work with developers to bring them new, creative ways to promote their games, as well as enable Huawei customers to have more ways to play than ever before.”

A top 3 global app marketplace, AppGallery offers a wide variety of global and local Apps across 18 categories including navigation & transport, news, social media, and more. AppGallery is available in more than 170 countries and regions with over 550 million monthly active users globally. Huawei has partnered with 4.5 million developers across the globe, and global app distribution from AppGallery has reached 384.4 billion as of year-end 2020.