BAODING, China, Dec. 7, 2021 /PRNewswire/ — On December 6, the new GWM model HAVAL DARGO was unveiled at the Jeddah Motor Show in Saudi Arabia and its global name was announced worldwide for the first time.

The Jeddah Motor Show is one of the largest motor shows in the Middle East market and it is also the largest and most influential motor show in Saudi Arabia. This time, it attracted a totally of 45 well-known media attending the show on site. As the bright star of the show, HAVAL DARGO not only attracted many spectators with its hardcore and stylish exterior design and tech-savvy interior configurations but also won the prize of Best Car Launched in Jeddah Motor Show awarded by LifeStyle media. “The DARGO looks very off-road and it is well suited to the Saudi terrain, with great potential for market development,” said the GWM dealer. 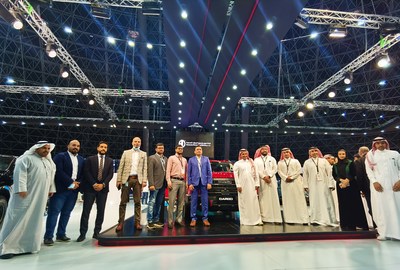 The global name of DARGO is originated based on the Chinese name which literally means “big dog” representing the faithful companion of mankind. The much-anticipated Chinese name was voted in by a large number of HAVAL fans and Chinese netizens through numerous online calls for names. It started a wave of user discussions and became a hot topic for a while. This new model also stands for the product concept of “Dare to go”. David Xu, the GWM GCC General Manager, believed that DARGO hoped to bring users the spiritual pursuit of daring to break free and to bravely push on forward.

This new advanced model is defined as the 3/4 scale car which combines the advantages of the city SUV and off- road SUV aiming to create a brand new category. According to the research of user demands, HAVAL categorizes cars of sedans and all-terrain crossovers into several levels including sedans for daily use, station wagons for travel, urban SUVs with a high seating position, and large space suitable for driving in the city, and hard-core SUV special for driving in the wild. Besides above, there should also be a model that combines hard-core and urban SUVs into one to meet all the scenarios from driving in the cities to driving off road on country trips, so DARGO has been created to bring users much more comprehensive driving experience.

Up till now, DARGO has become a popular new model and sells well in China market. Just over a year after its launch, its cumulative sales has exceeded 100,000 units. Recently, this car also won the title of 2021 most popular SUV as the first of list of the China Automotive Industry Customer Satisfaction Index.

As a global brand new model, HAVAL DARGO will start presale in Saudi Arabia. In the near future, this model will also be available in Iraq, Chile, Russia, and other countries to accompany more and more users in the global market.

Connaught Bar In London Named No.1 As The World’s 50 Best Bars 2021 Are Revealed