NEW DELHI, March 8, 2022 /PRNewswire/ — Howzat, Junglee Games’ immensely popular fantasy sports platform, onboarded another cricket star by signing legendary former Indian off-spinner, Harbhajan Singh as its latest brand ambassador. Howzat is also endorsed by Yuvraj Singh, Irfan Pathan, and Suresh Raina, and the addition of one of the game’s all-time greats will only add to the popularity of the fantasy app. Harbhajan, who also represented Mumbai Indians, Chennai Super Kings, and Kolkata Knight Riders, won every white-ball trophy on offer with Team India and helped his franchises win the IPL on four occasions. 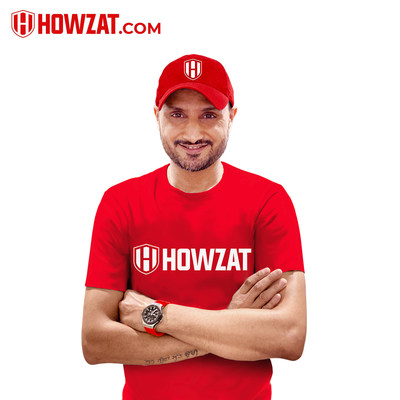 Harbhajan expressed his delight at his partnership with Howzat: "Cricket has been my life for as long as I can remember," he said. "I have always enjoyed playing on the field and am now looking forward to having an equally entertaining time off-field with the Howzat app. It will keep me closely connected with my fans and to the field. Howzat has amped the level and thrill of the game. For cricket fans, it really is the ultimate test of skill and their understanding of the game. I greatly enjoy playing on the app myself and I hope as a brand ambassador, I can engage with millions of fans across the country."

Commenting on the partnership, Bharat Bhatia, VP of Marketing at Junglee Games, said: "This is an incredibly proud moment for the Howzat brand. Harbhajan Singh needs no introduction for any cricket lover. For years, we at Howzat have been focused on providing the best and most rewarding fantasy sports experience to our users. I’m sure our partnership with Harbhajan will be a big moment for cricket lovers, who will get an opportunity to play with one of the world’s best bowlers and a bonafide legend of the game."

Harbhajan is one of only four Indian bowlers to have taken 400 Test wickets. Four years after making his India debut at 17, Harbhajan created history in the three Tests against Steve Waugh’s ‘invincible’ Australian team in 2001. He claimed 32 wickets in those 3 matches and played a key role in the miraculous win at Eden Gardens and an equally dramatic triumph in Chennai that sealed the series. He was part of the core group of players that made the Mumbai Indians the IPL’s most successful team and he won another title with Chennai in 2018. He retired from cricket in December 2021, with more than 700 international wickets to his name.

Founded in 2012 by Ankush Gera, Junglee Games is the fastest-growing skill-gaming platform, with over 50 million users across the globe. The company is on a mission to build games that will entertain, and be remembered by, millions of people for years. Operating mainly from San Francisco and Delhi, Junglee Games has teams in San Francisco, Hong Kong, India, Vancouver, Argentina, and Poland. The most notable products of the company include Junglee Rummy, Eatme.io, and Howzat. After establishing a strong footing and a dominant position in India, Junglee Games plans to expand to the US and the UK. To support this endeavor, the company plans to build and launch new global IP while foraying into eSports and mSports.