NEW DELHI, Oct. 18, 2021 /PRNewswire/ — World-renowned spiritual leader and founder of Shrimad Rajchandra Mission Dharampur, Pujya Gurudevshri Rakeshji has authored a lucid commentary in English, simplifying the essence embedded within every verse of Atmasiddhi Shastra for seekers around the world. The book is a step-by-step guide to self-realisation written with great compassion and vision. A universal and indisputable path is presented through an open-hearted, logical dialogue between an experienced Master and an earnest seeker. Published by HarperCollins India, this book will be launched on 21 October 2021.

Aligning with the ancient traditions of the great composers, Shrimadji paid obeisance to the supremely benevolent Shri Sadguru Bhagwān and established the r elation in the first verse.  In this second verse, He introduces the remaining two aspects of the text: the subject and the purpose.

Meaning of the Verse

In this present era, the path of liberation has almost become extinct. It has been clearly revealed here without concealing, for the contemplation of true seekers.

According to Jain scriptures, there are several different regions in the universe. The region in which we currently reside is called Bharat kshetra. The current era is called dusham kāl, which is the declining time period, when the path of liberation has almost vanished. In the first half o f t his verse, through the words ‘ bahu lop‘, Shrimadji indicates that in the current period of time, the pure path of liberation is almost lost. However, it is not completely obscured and although difficult, it is not yet impossible to obtain. Possessing an incorrect understanding of dharma, one gets impeded by his own insistences regarding opinions, sects, etc., about the path. Trapped in a maze of external practices, he runs around in circles, losing his way despite walking for miles. Hence, due to this unfortunate reality, Shrimadji proclaims that He will unravel the true path of liberation for the benefit of spiritual seekers.

Although the path of liberation has already been described in numerous ancient scriptures, they were composed to suit the needs of those times. Shrimadji has composed this scripture keeping present conditions in mind. With utmost divinity, He has unfolded the spiritual essence using such simple language that seekers everywhere can reflect upon it and benefit from the knowledge.

Through the word ‘agopya‘, Shrimadji states that the path explained here is the same one illuminated by infinite omniscient ones. He expounds the path as it is, without additions or subtractions and without concealing facts or reservations. He has absolutely no selfish motives or prejudices in this highest endeavour. Hence, this proves to be a testament to the authenticity of the scripture.

Shrimadji’s pledge to re-establish the true path kindles hope in this era of darkness. Shri Ātmasiddhi Shāstra serves as a beacon to lead one out from the depths of darkness. All that is required now, is the willingness to be led.

Prior to revealing the true path of liberation, Shrimadji points out the prevalent wrong beliefs and conduct regarding it. In this verse, He portrays a tragic picture of why this path seems to have disappeared in the present times. Shrimadji says –

Meaning of the Verse

While some have become mechanical ritualists, others have become dry intellectualists. Compassion arises for them as they believe themselves to be on the path of liberation.

While every religion propounds both theoretical and practical aspects, some people emphasise only metaphysics and others, only rituals. Some believe that liberation can be achieved by merely observing rites, and others through mere theoretical knowledge. In this verse, Shrimadji highlights the two kinds of people who follow the path of liberation with an incorrect understanding: those who are bogged down by rituals and those who pursue superficial scriptural knowledge. He identifies them as ‘kriyājad‘, the mechanical ritualist and ‘shushkjnāni‘, the dry intellectualist.

Mirroring the two above-mentioned behaviours, some believe that only ‘doing’ leads to liberation, neglecting the study of the true essence, which proves to be a mistake. Similarly, others believe that only ‘knowing’ leads to liberation and they read religious books, neglecting religious practice, which also proves to be a mistake. Their actions descend to mere mechanical ritualism and their knowledge becomes sheer rote learning. Through actions performed without correct understanding or knowledge sans virtue, they are nowhere near self-realisation. They are both trapped in a maze and yet under the delusion that they are on the path of liberation.

Shrimadji views their pitiable condition and is overwhelmed with compassion. He does not condemn them, instead feels sympathetic to their plight. With patient wisdom, He first focuses on the flaw in their method and then proceeds to set them on the right path. Thus, clearly stating that neither mere rituals nor mere knowledge prove to be beneficial, Shrimadji has compassionately guided all seekers of the path across all times.

Born on 26 September, 1966 in Mumbai, India, Pujya Gurudevshri showed signs of divinity at a very young age. An ardent devotee of Shrimad Rajchandraji, blending theory with experience and the head with the heart, Pujya Gurudevshri provides powerful and practical tools to joyfully tread the journey inward. His mastery of the spiritual principles, illuminating wisdom, pure love, rationality, oratory flair and sparkling wit, captivates people of any age or background. Pujya Gurudevshri reveals the deepest truths embedded in a vast array of scriptures. He has authored inspiring books on spirituality, translated in multiple languages. 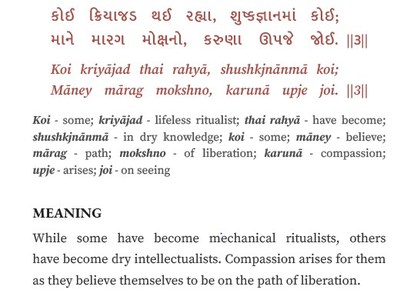