The festival that celebrates Indian literature, culture, art, music and cinema creates history with impactful performances and celebration of traditional Indian art forms and culture across the Globe

BHOPAL, India, Dec. 1, 2021 /PRNewswire/ — ‘Vishwarang 2021’ – the global Art, Culture and Literature festival came to an exciting closure with a promise to return in 2022, with a message of peace and unity across the globe. The month-long festival was inaugurated by the Union Minister Mr Prahlad Patel, in the presence of Vishwarang Director Aditi Vats, to bring forth the vision helmed by Social Entrepreneur, Chancellor of RNTU and Director General of Vishwarang- Mr Santosh Chaubey. Minister Prahlad Patel also launched the website for ‘Vishwarang’, created to focus on the cultural trends and creativity of the younger generation. Mr Patel also unveiled the idol of Rabindranath Tagore, which gave an exciting head-start to the pomp and show, along with a ‘yatra’ at Rabindranath Tagore University (RNTU). 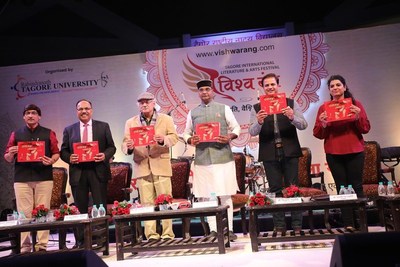 The third edition of Vishwarang was inaugurated with a press conference in collaboration with thirty countries, who participated seeking inspiration from the goal of harmony of ‘Vishwarang’, set three years ago when the festival started. Set out with the vision to encompass literature and arts while highlighting the universal aspect and nature of Indian language and culture, Vishwarang amplified the festival to be witnessed and accepted at a global platform.

This year, the festival was in a hybrid format and events were held on both offline and online platforms, and has reached around 42 million across 25+ countries. Vishwarang festival was trending no. 2 on Twitter across India during the event and the content around Indian Art & Culture was viewed by 18 million viewers.

Partner Country Festival – The partner country festival continued from 10th to 24th November with various discussions on Indian culture, classical art and children’s literature, with participation from the Netherlands, New Zealand and the USA. 26 countries participated in the Vishwarang Partner Country Festival and various other events on Arts and Literature. The virtual sessions in America, Netherland, New Zealand, Spain, Russia, Ukraine and UAE witnessed participation from culture enthusiasts. It is noteworthy that the Vishwarang festival that emerged from Central India is now gaining fame in other countries. The first session of the day, being addressed from the Netherlands, was presided over by Director of Gandhi Kendra, Mr Mohan Singh. Mr Mohan said that the purpose of children’s literature was not limited only to entertain but also to enhance the personalities of our students. Through literature, we can give strength to the growing minds of children, so the spirit of dedication and culture can be instilled among them.

Vishwarang International Children’s Film Festival – Screenwriter, actor and director Amole Gupte, known for his work on Bollywood films like Taare Zameen Par, Stanley ka Dabba, Kaminey and others, was also a guest at the Children’s Film Festival. He answered questions on behalf of the children asked by Sudip Sohni, Co-director of Vishwarang, where he spoke that he felt safe and happy with children because they are honest. Gupte further said that he always wanted to stand by children by staying childlike, to lower his frustration thrown by the pressures of adult life. He believes that Films should be taught in schools, just like other subjects, like Physics and Chemistry.

Prominent children’s filmmakers like Sanjay Chauhan, Narayan Parshruman, and Saumitra Ranade interacted with art critic Vinay Upadhyay on issues related to cinema production in the afternoon sessions. A famous children’s movie ‘Pahuna: The Little Visitors’ was screened at the Vishwarang festival, an Indian-Nepali language film produced by Priyanka Chopra and directed by Pakhi Tyrewala. Following the screening, the film’s co-producer Pragya Rathore interacted with the youth, talked about the nuances related to filmmaking and children cinema.

AISECT Group of Universities organised a programme called “Shikshak Samman” to felicitate the teachers who did excellent work for education. The teachers who will be felicitated later this year were announced during the concluding ceremony of ‘Vishwarang-2021’. At least six teachers have been selected from across the country through online student voting.

Speaking of the festival, Mr Santosh Kumar Chaubey said, “Vishwarang is not just about knowledge or education, it is about harmony and diversity too. This edition of Vishwarang is dedicated to 75 years of cultural independence. The objective of Vishwarang is to celebrate the true spirit of poetry, art, music, culture & literature to a global audience. Over the last 10 days, we had artists and eminent personalities from 25+ countries joining hands to enlighten and appreciate their country’s culture, art and literature. We will be back next year again with the 4th edition of Vishwarang where more people can get a chance to widen their horizons and improve cultural awareness about the culture and heritage of India and celebrate it across the world.“

Closing the 3rd edition, Rabindranath Tagore University has set the tone for the next edition of the festival scheduled in 2022. The festival will return with more grandeur and a promise to enthral art & culture enthusiasts worldwide.

adidas Inspires Young Athletes, Delivers an audacious expression of the ‘we over me’ mentality