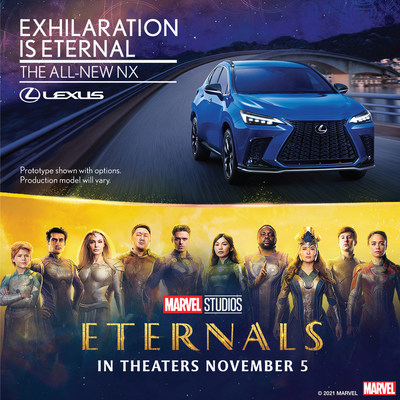 The movie features an exciting new team of Super Heroes in the Marvel Cinematic Universe, ancient beings who have been living on Earth in secret for thousands of years. Alongside the Eternals, is the Lexus NX, with its striking design, exhilarating dynamism, and avant-garde features that enable the superheroes to conquer the city.

Both the superheroes and supercar are unparalleled and in a class of their own – The Eternals have extraordinary powers to battle the Deviants, while the new NX has exceptional craftsmanship and purposeful technology to thrill ones everyday drive.

The NX was first launched in India in 2018 showcasing bold design and exhilarating performance. In 2020, the NX portfolio was further expanded with the launch of the new variant NX 300h Exquisite. Lexus will be launching the all-new NX 300h very soon, ushering in a new era of luxury, that embraces the brand’s vision of electrification, with intuitive technology, performance, and design.

Catch the film in theatres in India on November 5th to see ones favorite superheroes driving the spectacular new Lexus NX. For more information on Lexus and Marvel Studios’ “Eternals” collaboration, visit  www.lexus.com/eternals.

Marvel Studios’ “Eternals” follows a group of heroes from beyond the stars who had protected the Earth since the dawn of man. When monstrous creatures called the Deviants, long thought lost to history, mysteriously return, the Eternals are forced to reunite in order to defend humanity once again.

Lexus launched in 1989 with a flagship sedan and a guest experience that helped define the premium automotive industry. In 1998, Lexus introduced the luxury crossover category with the launch of the Lexus RX. The luxury hybrid sales leader, Lexus delivered the world’s first luxury hybrid and has since sold over 2 million hybrid vehicles. Since its debut in India in March 2017, Lexus has aimed to craft a better tomorrow and redefine luxury in the world’s fastest-growing major economy. The brand strives to consistently deliver exceptional design and quality to the discerning Indian guest with a portfolio of 6 vehicles, 5 of which are self-charging hybrid electric vehicles. In 2020, Lexus’ presence in the Indian market was further strengthened with the introduction of its first locally produced model, ES 300h. A global luxury automotive brand with an unwavering commitment to bold, uncompromising design, exceptional craftsmanship, and exhilarating performance, Lexus has developed its lineup to meet the needs of the next generation of global luxury guests and is currently available in over 90 countries worldwide. Lexus associates/team members across the world are dedicated to crafting amazing experiences that are uniquely Lexus, and that excite and change the world.