– To drive social change, youth needs to be sensitized and nurtured 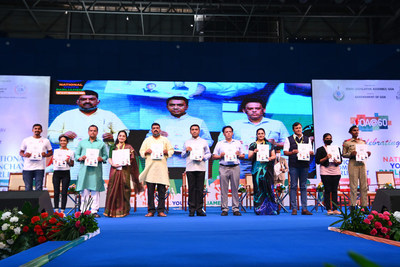 Shri Pramod Sawant, Hon’ble Chief Minister of Goa, said, “We are committed towards developing youth in the best possible way to lead this democracy. Our government is working tirelessly to provide the best possible facilities for the betterment of the youth community. It has initiated numerous schemes to complement the growth and development of youth in the state of Goa. Also, we are focusing on upgrading technical education and have started various youth oriented courses in schools and colleges to provide them practical experiences that help them develop skills that the industry requires. We appeal to the youth of the state of Goa to supplement our efforts towards socio-economic development of the state.”

Shri. Rajesh Patnekar, Hon’ble Speaker, Goa Legislative Assembly, said, “Adaptation and evolution is the key to success for youth. Their ability to adapt to situations and evolve into better individuals will be determinants of success. Youth of today are blessed with technology with help of which they can drive seamless e-governance to reshape and revamp this country. The very foundation of active youth participation will rest on knowledge sharing and networking.”

Shri. Manohar Ajgaonkar, Hon’ble Deputy Chief Minister & Minister for Tourism, Sports & Youth Affairs, Government of Goa, said, “Apart from education related schemes, many concessions and schemes have been implemented by our government for youth welfare. Sports policy has been strengthened by starting equipped training centers to prepare players who can compete at international tournaments. Efforts undertaken by our government will benefit the students of rural and urban areas of the state. The government is trying to make competitive players with the aim of Young India. To make the youth stand on their feet, facilities like personality development, career guidance have also been offered.“

Shri Jayant Sahasrabuddhe, National Organizing Secretary, Vijnan Bharati, while passing the motion for congratulating Hon’ble PM of India for presenting five-point agenda “PANCHAMRIT” to counter Global Warming and Climate Change at recently held COP 26 at Glasgow, said, “Organisation of events like National Youth Parliament as the state of Goa witnesses 60 years of liberation and the nation observes 75 years of a progressive India, is matter of great delight. India, globally, is considered as a force to reckon with, and the youth have played a major role for India having an image like that. Recently, PM Modi gave a promise of PANCHAMITRA at the Conference of Parties -26 held at Glasgow, to mitigate the effects of global warming and climate change, and I’m certain that we will live up to the promise we have made to the world and our youth will certainly help us drive initiatives that will contribute hugely to mitigate the climate change faced by the world. Through means of such parliaments, the youth of our country will become drivers of reforms that will strengthen India’s clout globally.”

Smt Nupur Sharma, National Spokesperson, BJP, Eminent Lawyer, addressed the youthful gathering, “In a democracy the loudest voice should be of the youth. Participation of youth starts from the day you exercise your suffrage rights. But if I have the right to vote and choose my government, then it is also fundamental that I have the right to voice my opinion when the government is not functioning in the right manner. It becomes important in this context that when we voice our opinions we have clear cut ideologies. These ideologies you imbibe by educating yourself. So youth should always make sure that whatever opinions you voice are well informed.”

Shri. Rahul V. Karad, Managing Trustee & Executive President, MAEER’s MIT and Executive President, MIT World Peace University & Chief Initiator, MIT School of Government highlighting the role of youth participation in democracy, said, ” In 2003, my team and I had the vision to establish a school to impart formal training in political leadership while facing opposition, and I am delighted to share that through initiatives like National Youth Parliament, National Women Parliament, National Panchayat Parliament we have been successful in creating a cadre of more than 500 dedicated, committed and ethical students who are now doing wonders in political arena and public life. We are expecting a high level of commitment and engagement from all the youth who have participated in this august gathering to think about how they can contribute to this vibrant democracy through their participation in politics. Our aim is to initiate the very spirit of student politics in the youth and inculcate publically spirited and socially sensitive values during their formative years to raise their extent of sensitivity, awareness, involvement, responsiveness, access and say in political and democratic processes for a robust democracy.”

About MIT School of Government (MIT-SOG):

The MIT School of Government (MIT-SOG), a constituent unit of MIT World Peace University (MIT-WPU), Pune, is the first institute of its kind to initiate a two-year Master’s degree program in Political Leadership & Government or MPG (UGC-approved program) for a Career in Politics.

MIT-SOG was initiated in the year 2005 under the visionary leadership of Shri. Rahul V. Karad – Initiator & Executive President, MIT World Peace University with the vision of creating Ethical, Spirited,  and Committed Political Leadership for the country from the grassroots and from all walks of life.

Under the able guidance of Late. Shri. T.N Seshan, First Chairman, MIT-SOG, former Chief-Election Commissioner of India (also well known as the Father of Electoral Reforms in India), the curriculum for MPG program at MIT-SOG was designed with the complete involvement of highly decorated officials from Government, Politics, Judiciary, Media and Academia. MIT-SOG specifically caters to the need for training students in politics & government in order to become trained Political Leaders of the country.

Shri. Jamyang Tsering Namgyal, Hon’ble Member of Parliament Lok Sabha, (Ladakh, Jammu and Kashmir), State President, Bharatiya Janata Party, Ladakh, said, “Our young India wants freedom from poverty, freedom from unemployment, freedom from casteism. We can’t only rely on the government but we as youth have to become the change we want to see. As a 21st century youth, we must aim to become job providers and not only job seekers.“

Shri Khurshed Batliwala, Motivational Speaker, Art of Living, said, “Do whatever is close to your heart and use social media to showcase it. This way you will use social networking to drive social action.”

Shri Asit Kumar Modi, Producer, TV Show Taarak Mehta Ka Ooltah Chashma & Swachh Bharat Ambassador, said, “Youth needs to use social media responsibly and the best way to do that is join hands with a cause you are passionate about and then use social media to amplify your commitment to the Noble cause.”