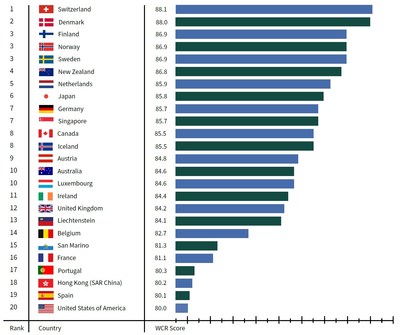 Reliance was placed on official statistics to evaluate a score for the defined motivators of Safety and Security, Quality of Life, Economic Opportunity, Global Mobility and Financial Freedom. Backed by research from leading data banks, interviews and a survey undertaken by over 500 wealthy investors, the WCR looks beyond passport strength and emphasises pivotal factors that play a role in choosing the right second citizenship.

Micha Emmett, the CEO of CS Global Partners, said that the WCR stands apart from other reports in the industry because it “examines which countries offer the most benefits for global citizens, particularly in a post-COVID world where those that have the means are consistently searching for greater opportunities and better protection.”

“We wanted to capture what truly concerns and affects a global citizen,” she said. “When there are options to gain a second or third citizenship, the first question HNWIs mind is ‘where is the next place to be associated with?'”

“High-net-worth individuals must consider a myriad of factors when deciding something as monumental as where to obtain second citizenship and build a second home. While passport strength is, of course, an important component, it is also one that is subject to the greatest change as evidenced by pandemic related travel restrictions,” she added.

Results show Switzerland scoring the highest with 88.1, followed by Denmark (88.0) in second place and Finland, Norway and Sweden tied for third (86.9). Notably, global superpowers such as the United States did not rank in the top ten, symbolising a significant shift in what these economic giants can tangibly offer the global elite. Comparatively, Asia emerged as a hub for economic prosperity due to its business advantages, particularly Japan, which ranked sixth and Singapore, which came in seventh.

Aside from analysing the performance of countries, the WCR looks at ways HNWIs protect and grow their wealth. This includes implementing an effective financial plan that considers inheritance and wealth taxes and investing in emerging valuable assets like cryptocurrency.

The report finds that citizenship by investment (CBI) is also an effective tool for the world’s wealthiest, and it has become a trend exacerbated during the pandemic. CBI offers an alternative and time-effective solution for those who do not have a marriage, descent, or naturalisation attachment to other countries. It ultimately enables applicants to obtain a second citizenship, often within three to four months, without any former ties to the nation, as long as they can pass a multi-tiered vetting procedure.

According to the report, entrepreneurs and business people actively sought investments that stood the test of time during the thick of lockdowns. While predicting the future isn’t possible, keeping abreast of global trends has enabled many HNWIs and global citizens to identify opportunities in places they may not have considered before. The WCR aims to bring these trends to light and make the second citizenship process simpler by compiling relevant data that most concerns affluent individuals and their families.