– Agreements with Ferrandi Paris, Dassault Systèmes and RATP DeV Saudi Arabia to develop AlUla into a global smart city for residents and visitors 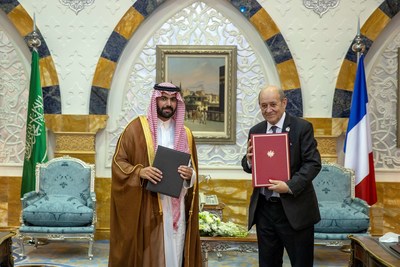 The signings coincided with Saturday’s official visit to Jeddah by the French President Emmanuel Macron and his meeting with His Royal Highness Prince Mohammad bin Salman bin Abdulaziz Al-Saud, Crown Prince and Chairman of the Board of Directors of the Royal Commission for AlUla County.

The partnerships come as part of RCU’s integrated development programme to transform AlUla into a global cultural and natural heritage destination and a gateway city offering an outstanding quality of life for residents and visitors.

Villa Hegra at AlUla will be a unique place where artists, writers and painters come together, representing a continuity of AlUla’s legacy as a hub of commercial and cultural exchange. It will be respectful of the environment and history, and inclusive of local populations. Currently there are 11 iterations of the “Villa” worldwide, with seven in France and four overseas from Mexico to Rome, each showcasing the best of French and global culture.

The 15,100 sq m Villa Hegra will be a cluster of entities including the exclusive AlUla International College of Tourism & Hospitality, a 6,600 sq m lifestyle apartment-hotel, cultural centre, arts residence quarters and social club.

“The relationship between France and Saudi Arabia is built upon mutual recognition of the important of cultural exchange and development. Since the signing of our first agreements in 2018, we have worked together to create a new template for cultural diplomacy – one that puts the sharing of knowledge, expertise and resources at the fore and opens up new opportunities for the local community. The arrival of Villa Hegra at AlUla adds another layer to AlUla’s legacy as a place for the world to come together,” said Amr AlMadani, Chief Executive Officer of the Royal Commission for AlUla.

RCU also signed an exclusive agreement with the Ferrandi Paris Culinary Arts and Hospitality Institute to jointly create a Ferrandi-branded AlUla International College of Tourism & Hospitality to accelerate the long-term vision of establishing AlUla as the regional home of hospitality, tourism and the culinary arts.

Signed by Amr AlMadani, Chief Executive Officer of the Royal Commission for AlUla, and Bruno de Monte, CEO of Ferrandi, the exclusive partnership will contribute to AlUla’s strategy to become the primary knowledge and training hub for tourism, hospitality and culinary arts in the Kingdom. By partnering with world-class institutions, it aims to attract and upskill international and local talent into industry professionals to lead the sectors growth in AlUla.

In addition to Villa Hegra and the Ferrandi Paris Culinary Arts and Hospitality Institute, RCU also signed agreements with Dassault Systèmes and RATP DeV Saudi Arabia, focused on delivering a city fit for the future – providing citizens, residents and tourists with an outstanding quality of life by streamlining and digitizing processes and delivering public transport and mobility operations.

With Dassault Systèmes, RCU has partnered on the creation of a digital twin – a digital copy of AlUla that will function as an important tool for planning, development, municipal operations, community and investor citizens and investors. The agreement builds on the efforts of RCU to develop an integrated geo-spatial database.

Similarly, the partnership with RATP DeV Saudi Arabia leverages the organisation’s 120 years of transport operation in the development of a world class public transportation system in AlUla. The partnership will see RCU access the latest in mobility innovation and best practices in mobility operations and solutions, including autonomous vehicles, electric vehicles and hybrid vehicles that meet the needs of locals and tourists alike.

“AlUla is an experimental lab for the future of tourism. By partnering with industry leading entities such as the Ferrandi Paris Culinary Arts and Hospitality Institute, Dassault Systèmes and RATP DeV Saudi Arabia, we can access their vast store of knowledge, industry know-how as well as research and innovation to build a destination that is not only a cultural and artistic haven and a benchmark for sustainable development but an economic engine for the industry,” added Amr AlMadani, Chief Executive Officer of the Royal Commission for AlUla.

The agreements are an extension of the strong co-operation between the two nations across diverse sectors in AlUla following the signing of an intergovernmental agreement to develop new cultural, education and arts assets at AlUla on April 10, 2018. The agreement has led to a strong French role in AlUla, in areas from archaeology to smart-city infrastructure to hospitality, with the architect Jean Nouvel planning to build a luxury resort that will be carved into the sandstone rocks of AlUla, thereby reviving the traditional stonework of the area’s ancient Nabataean masons.

On the side lines of the Presidential visit, RCU also took part in a Saudi-French investment forum at Jeddah to explore further opportunities of mutual benefit.

It is always AlUla / not Al-Ula

About the Royal Commission for AlUla

The Royal Commission for AlUla (RCU) was established by royal decree in July 2017 to preserve and develop AlUla, a region of outstanding natural and cultural significance in north-west Saudi Arabia. RCU’s long-term plan outlines a responsible, sustainable, and sensitive approach to urban and economic development, that preserves the area’s natural and historic heritage, while establishing AlUla as a desirable location to live, work, and visit. This encompasses a broad range of initiatives across archaeology, tourism, culture, education, and the arts, reflecting a commitment to meeting the economic diversification, local community empowerment, and heritage preservation priorities of the Kingdom of Saudi Arabia’s Vision 2030 programme.

CGTN: Democracy should not be decided by ‘self-appointed judges,’ China says in white paper