GURUGRAM, India, March 10, 2022 /PRNewswire/ — The SKOCH Group today released the SKOCH Governance Report Card for 2021, ranking the states according to their performance in various projects at state, district and municipal level. Andhra Pradesh bagged the number 1 spot for the second consecutive year. 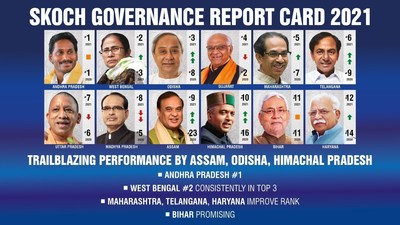 The SKOCH State of Governance report is an annual report that studies project level outcomes across various states of India. For 2021, West Bengal, Odisha, Gujarat and Maharashtra, with Andhra completed the top 5 “Star States” in India. Telangana, Uttar Pradesh, Madhya Pradesh, Assam and Himachal Pradesh were deemed the “Performers” and completed the Top 10.

Speaking about the release of the report, Mr. Sameer Kochar, Chairman SKOCH Group, said, “Andhra Pradesh, West Bengal and Odisha are doing remarkable work in a number of verticals like Agriculture, Transport, eGovernance and Ease of Doing Business and that is why these states are constantly doing well in our yearly State of Governance Report Card. Assam, Himachal Pradesh, J&K (UT) and Chattisgarh have made the biggest jumps. The competition between the states is growing fiercer with each passing year and we are seeing a lot of very good projects being initiated and completed in record times.”

“The SKOCH State of Governance Report is important as it is the only open and unbiased report card based purely on the performance of the state governments in various projects at different levels. We believe that scrutiny of these projects is vital to good governance, and we are doing our bit in promoting it and holding the states responsible,” he added.

The SKOCH State of Governance report also maps the shifting interests of different state governments and provides valuable insights into governance trends and opportunities. In 2021, eGovernance, Health and Agriculture saw increased focus while the focus on Urban Development, Transport and Education decreased. In 2022, we might see a renewed focus on education, owing to the opening of educational institutes after a substantial period.

The report is backed by a meticulous and exhaustive methodology where the best performing projects are submitted by the states for evaluation & the projects are first vetted by SKOCH research analysts and evaluated by a jury of three domain experts. After jury and peer evaluation, the shortlisted projects are put to a popular vote on the website. This is supported by field research to assess the impact of the projects on the intended targets. Merit-listed projects garner expert votes through exhibition and live polls to get an overall score, which decides the ranking of the state.

The full report is available at https://stateofgovernance.inclusion.in/ and the survey has opened for 2022. The application process for states is hosted at https://award.skoch.in/apply/

SKOCH Award, independently instituted in 2003, is India’s honest civilian honour conferred by an independent organisation as a third party assessment. It is the only award in the country that is based on felt-needs assessment and outcome evaluation based on evidence. It therefore, recognises people, projects and institutions that go the extra mile to make India a better nation.  SKOCH Award is conferred for having made a definitive impact on governance improvement and growth of India. These are based on primary research, nominations and recommendations by the Collegium of past SKOCH Awardees and the Distinguished Fellows of SKOCH Development Foundation. SKOCH Award comes with a backing of reputation of more than two decades. It is distinctive for its approach of selection of awardees. The SKOCH Award not only acknowledges exceptional achievers – organisations and individuals – but also spurs institutional guidance and best practices.