HANGZHOU, China, Oct. 20, 2021 /PRNewswire/ — On October 15, the complete collection of the 15-year book series, Textiles from Dunhuang, was finally launched at Donghua University. Led by Prof. Zhao Feng, director of China National Silk Museum and professor of Donghua University, the team collaborated with specialists from four countries to complete this historical masterpiece.

It includes 10 volumes of Chinese and English versions of Dunhuang textiles from UK, French, Russian, and Chinese collections in Lushun and Dunhuang Academy, with multiple texts and over a thousand pieces from large banners to small fragments. Completion of the vast Textiles from Dunhuang project benefited from its strong international team from cultural institutions across the world, including British Museum, British Library, Victoria and Albert Museum, Musee Guimet, National Library of France, State Hermitage Museum St. Petersburg, Dunhuang Academy, and Lushun Museum based on research from the China National Silk Museum and Donghua University. 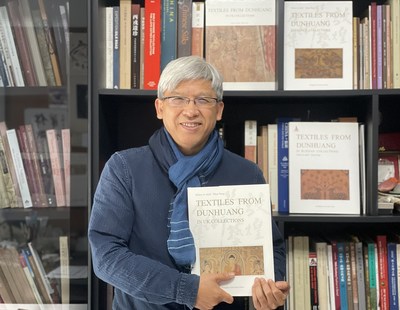 From 2004, Donghua University and China National Silk Museum jointly established a Dunhuang Textile Research Team, which started studying Dunhuang textiles in a comprehensive and systematic way. In 2006, Prof. Zhao Feng was invited to UK, France, and Russia to study fabric remains from the Library Cave (Cave 17) in Mogao Grottos, Dunhuang. Since the end of 2013, another team from China National Silk Museum carried out systematic analysis and conservation of textiles mainly from the northern part of Mogao Grottos.

For the first time, this book series takes Dunhuang textiles as a complete object for research and publication that fills the gap in Dunhuang studies. As Mikhail Piotrovsky, director of the State Hermitage Museum said, “Thanks to these studies and the ensuing publications we can reconstruct the complex history of silk and its production in the 1st millennium AD — the material that became the symbol and gave the name to the great trade route.” Textiles from Dunhuang is a work of excellence signifying, “It shows the importance of rigorous training, experience with historical materials and mutual collaboration at the highest level, and it has opened the way for further research and understanding in the future”, Helen Wang, the curator from the British Museum added.