MUMBAI, India, Oct. 27, 2021 /PRNewswire/ — A celebration of the unique UK-India relationship landed in Mumbai last weekend, with a series of events saluting the value of embracing different perspectives and inviting the Indian audience to see things differently. 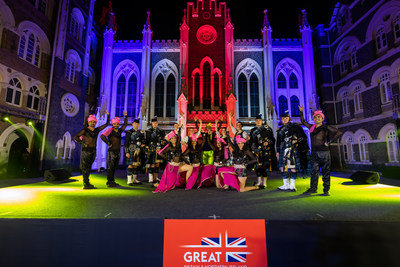 Cultural collaborations, food and drink have always provided a living bridge between the UK and India and the ‘GREAT Calling Mumbai campaign’ paid tribute to this alongside the arrival of the Carrier Strike Group in Mumbai.

The celebrations began with a scintillating performance of music and dance as bagpipers performed from the Royal Edinburgh Military Tattoo. Their iconic sounds were supported by Scottish Highland dancers and local performers from Hormuzd Khambata Dance Company at the St. Xavier’s College in Mumbai. The performance included Indian dancers attempting the Highland Fling and the Scottish dancers showing some Bollywood moves. This new and energetic collaboration honoured the two countries and their partnership demonstrated the benefits of collaboration to show a fresh point of view.  The Tattoo has previously enthralled audiences in Australia, New Zealand, China, and across Europe.

This was followed by a masterclass with Michelin Star Chef Vineet Bhatia, the Mumbai-born chef is internationally renowned for his progressive modern Indian cuisine. He showcased culinary delights in a UK-Indian fusion cooking session while highlighting UK’s unique food culture that dates back centuries, from brewing beer and wine to dairy and cheese making.

The GREAT Calling Mumbai campaign concluded with a specially curated drinks tasting session, led by Diageo, where connoisseurs were presented with an opportunity to learn about and sample beverages from the UK including Scotch and the world’s first non-alcoholic spirit, Seedlip. The UK is the birthplace of many of the world’s favourite spirits, from the remote Scotch whisky distilleries with hundreds of years of history, to craft gins of London that are trialling new and exciting flavours. UK spirits celebrate tradition and encourage innovation in bars across the globe.

Speaking about the campaign and emphasising the association between the two countries, Alan Gemmell, Her Majesty’s Trade Commissioner for South Asia and Deputy High Commissioner for Western India, said, “The UK and Mumbai have a long-standing history with many shared interests. The Carrier Strike Group’s deployment to Mumbai – the most potent display of combined British sea and air power for quarter of a century – is an embodiment of that commitment.  With the GREAT Calling Mumbai campaign, we were able to bring some of the best cultural, food and beverage showcases from Scotland and all across the UK to India’s financial capital. This unique exchange invites Mumbai to see things differently and adds a new flavour to the thriving relationship between the two regions.”

“Both countries are extremely close to my heart and I consider it a matter of pride to be able to showcase culinary creations from the UK in Mumbai. The two cuisines work perfectly in harmony uniting the quality of British produce and the flavour and creativity of Indian cooking. The UK has so much to offer, from the gentle and rolling hills in England, spectacular mountains in Wales, historic estates in Northern Ireland, and fresh waters of Scotland, the UK provides the perfect setting to sustainably produce the world’s finest food and drink products.”

Lord Offord of Garvel, Parliamentary Under Secretary of State to the Scotland Office, who was present at the events, added: “It was wonderful to be here in Mumbai showcasing some of the best of Scottish music, dance and whisky. The UK and India have so much in common and I look forward to working with my counterparts to further develop our mutual interests.”

The GREAT Britain and Northern Ireland campaign (GREAT) is the UK’s international brand. It works closely with UK businesses, not-for-profit organisations and high-profile figures to promote the best of the UK abroad.

GREAT works with hundreds of partners, such as the Royal Edinburgh Military Tattoo, to promote the best of all four nations of the UK, to the world. Activity is delivered in 150 markets around the world but India is a priority market.  The GREAT campaign invites global audiences to See Things Differently and to see a fresh side of the UK.

About the Carrier Strike Group

The arrival of the CSG in India represents the UK’s commitment to deepening diplomatic, economic and security ties and the transformation in the UK India relationship.

CSG21 is NATO’s first 5th generation Carrier Strike Group. It is a UK-led, highly technological, and internationally partnered deployment strengthening our alliances and national interests in a region critical to global peace and prosperity. The maiden CSG deployment will travel 26,000 miles, visiting more than 40 countries.