TAIPEI, Oct. 27, 2021 /PRNewswire/ — With the introduction of Intel® Z690 chipset alongside the new 12th-gen Core™ processors, GIGABYTE also launched a series of its own motherboards that cover a wide range of possible builds and options. For enthusiasts seeking nothing but maximum performance, the latest AORUS Z690 series motherboards reign supreme with the most robust power delivery, dominant thermal design, and complete DDR5 memory overclocking technology, making them the finest platform to build on for serious gaming, overclocking and more. 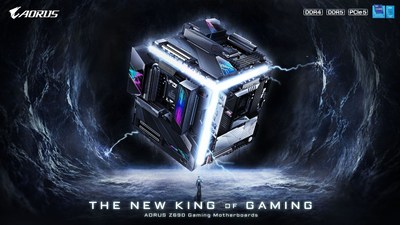 Intel’s latest Core™ processors, code-named Alder Lake, focuses on gaming performance, particularly in multi-core performance that promises substantial improvement compared to the predecessors. Thanks to the maximum 23-phase digital power design with the top-of-the-line cooling architecture, the AORUS motherboards are designed to unleash the full performance of the new CPUs by bringing stable and reliable power delivery, while keeping the temperature in check to prevent thermal throttling.

To further improve the overall cooling across the board, models such as the Z690 AORUS MASTER are equipped with Fins-Array III, the latest-gen cooling technology, that feature large heat dissipating fins that are 9 times bigger in terms of surface area compared with the traditional radiators. Such improvement can effectively remove more heat, while strengthening the thermal performance. The brand-new patented Thermal Guard XTREME design provides PCIe 4.0 M.2 SSD with heat dissipation upgrade. Even under heavy-duty use, the new design makes sure that lightning-fast data transfer without throttling.

Intel also introduced DDR5 memory for the first time in this generation of motherboards. In order to make it easier for everyone to take full advantage of the DDR5 overclocking performance, GIGABYTE has added exclusive overclocking functions to the BIOS settings on the Z690s. Regardless of the memory types, the DDR5 memory can be automatically accelerated with a simple click through GIGABYTE’s intelligent overclocking design.

A perfect platform for the 12th generation Core™ processors, the GIGABYTE AORUS Z690 series motherboards provide excellent performance and stability for enthusiasts and power users who demand extreme performance above all. For more information about the new king of gaming, please refer to: https://bit.ly/3G1CMTs