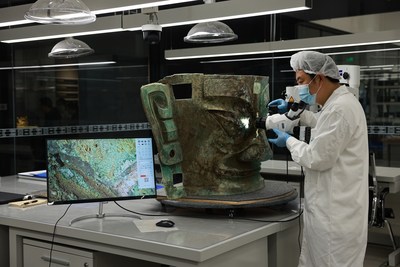 Sponsored by the Chinese Academy of Social Sciences, the annual selection considers the academic value of the archaeological findings as a key criterion. This year’s list includes six new archaeological discoveries around the country, with the Sanxingdui site and the Piluo site in Sichuan province making the list.

The Sanxingdui site was accidentally discovered in the 1920s by a farmer in Guanghan, Sichuan province, while he was repairing a sewage ditch.

A breakthrough came in the 1980s, when two large sacrificial pits were found. The discovery is dubbed one of the world’s greatest archaeological discoveries of the 20th century.

From November 2019 to May 2020, six new sacrificial pits were discovered at the site. By the end of 2021, archaeologists had unearthed more than 10,000 relics at the new pits, including gold masks, bronze figurines, ivory tusks, and silk remnants.

The relics are believed to be from the ancient Shu state, which lasted for over 2,000 years and dates back at least 4,800 years. They show a close connection with present-day Sichuan province, the middle and lower reaches of Yangtze River and the Central China Plain, and serve as a testimony to how a united yet diverse Chinese civilization was formed.

The Piluo site was discovered in May 2020 in Daocheng county, Sichuan province. Archaeologists found nearly 10,000 stone artifacts at the site at an altitude of 3,750 meters.

One of the most notable discoveries was Acheulean hand axes. It is the world’s highest-altitude finding of Acheulean tools, or the Lower Paleolithic culture’s skillfully-made flint axes.

Zheng Zhexuan, an archaeologist with the Sichuan Provincial Cultural Relics and Archaeology Research Institute, said they are so far the most exquisite and most complete Acheulean tools ever found in East Asia. The findings “also filled a gap in academic research showing how human beings migrated and thus brought cultural communications in ancient times”.

Both the Sanxingdui site and the Piluo site are among the major projects of “Archaeological China”, a major research program launched by the National Cultural Heritage Administration.