BEIJING, Feb. 11, 2022 /PRNewswire/ — A promotion conference for the investment environment of Wangcheng District of Changsha, central China’s Hunan Province was held on Thursday, when 18 major investment promotion projects were signed with total investment of 43.3 billion yuan (about 6.81 billion U.S. dollars). 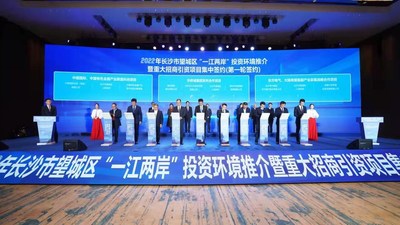 The newly signed projects include four invested by central enterprises, one with investment over ten billion yuan, and two over five billion yuan. The projects cover various fields of headquarters economy, cultural tourism, commercial complex and intelligent manufacturing, involving four projects ranked among top 500 in the world and three among top 500 in China.

Utilizing its advantageous location along the Xiangjiang River, Wangcheng is laying out a development plan to forge eight major industrial and commercial zones with an total area of 185 square kilometers along the riverside. Featuring different functions and themes including intelligent ecological environment, innovative business and economy, cultural tourism, etc, the eight zones should construct themselves into comprehensive favorable places to attract investors and talents across the globe.

It is an important move for the city of Changsha to support the riverside economy development of Wangcheng District, said Zhang Min, member of the Standing Committee of the Changsha Municipal Party Committee and secretary of the political and legal affairs commission of the municipal Party committee.