Stacy Spikes, Founder of MoviePass, Publishes “BLACK FOUNDER: The Hidden Power of Being an Outsider”

“Stacy Spikes provides rare insight into the vulnerable journey of being a founder. His story is an inspiration to those often written off and a reminder to always believe in yourself.”
—Henri Pierre-Jacques, cofounder of Harlem Capital

“In these pages, Stacy guides you through his career that’s filled with glory and hardships. An unflinching examination of what it really takes to be an entrepreneur in today’s world.”
—Jason Guerrasio, award-winning journalist at Insider

“Stacy gives revealing insights into the business world and its challenges. He delivers a powerful yet vulnerable view of the entrepreneurial journey rarely seen, and that’s guaranteed to inspire anyone with a dream.”
—Brenda Gilbert, cofounder and president, BRON

“Like [Steve] Jobs, Spikes built a company from scratch only to be pushed out. Like Jobs, he watched from the sidelines as it fell apart. And like Jobs, he will attempt a triumphant return to the business he built.”
—Eliana Dockterman, TIME magazine 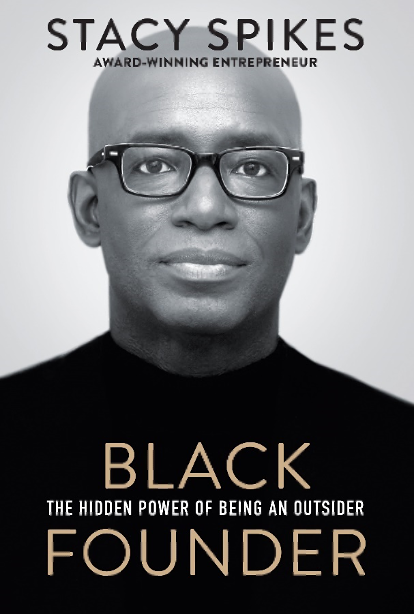 NEW YORK, Jan. 19, 2023 (GLOBE NEWSWIRE) — BLACK FOUNDER: The Hidden Power of Being an Outsider by Stacy Spikes is the book that no one thought he should write. It rips open the world of financial privilege and entertainment and reveals what it really takes to succeed when power, money and race collide. The memoir is being published by Kensington Press/Dafina and debuts in book stores and is available online January 24, 2023.

Spikes is the current CEO and original founder of subscription service MoviePass, the technology platform enhancing the exploration of film and the moviegoing experience. “This book represents my interpretation of what happened behind the scenes during the rise and fall of MoviePass,” said Spikes. “It’s a memoir about my journey, a first-hand account that provides more color and, at times, painful details about starting the company, attempts to secure outside investment, the sale to Helios & Matheson, and my eventual removal from the company.”

In this, captivating business memoir, Spikes tells the story of a young man with a singular vision, who packed up his truck at the age of 18 and drove from Houston to Hollywood with only $300 in his pocket. Spikes worked his way up the ranks at Motown Records, Sony Music Entertainment and Miramax Films, was the founder of the Urbanworld Film Festival, and named by USA Today as one of the 21 most influential Black leaders in tech, and as one of the “People to Watch in Silicon Alley” by Crain’s New York.

The strength, resilience and skills Spikes acquired to achieve these successes became the foundation he built upon to create MoviePass with his Co-founder, Hamet Watt. At the time, only 1 percent of venture capital funding went to Black entrepreneurs. Even in 2022, that number has only improved to 1.2 percent, according to TIME. MoviePass, which enables passionate movie fans to see movies in theaters for a monthly fee, was purchased by a Helios & Matheson in 2017. Spikes was ousted because of his defiant stance on the now doomed $10/month business model—and could only watch from the sidelines as his creation was driven into bankruptcy and dismantled.

But like all great plots, there were unforeseen twists ahead. Captivated by this story, Mark Wahlberg’s production company decided to make a documentary about MoviePass coming out in early 2023. While Spikes was pondering his next act, he was told MoviePass might be available to purchase out of bankruptcy. After some tough negotiations, Spikes rebought his company—with the goal of relaunching the beloved brand.

BLACK FOUNDER grants us access to the hidden world of tech start-ups, it’s a journey and guidebook to cracking the glass ceiling for any outsider facing impossible odds. The lessons come with humor, poignancy and enlightenment that will fuel the ambition and drive of anyone who wants to manifest their dreams.

A portion of the book proceeds will be donated to the Thurgood Marshall College Fund.

As Spikes writes, BLACK FOUNDER isn’t just a book for winners, it’s a book for everyone willing to try.

About Stacy Spikes
Spikes is an award-winning entrepreneur and inventor who USA Today named one of the 21 most influential Blacks in technology. He holds several technology patents and is the co-founder and CEO of the nation’s first theatrical subscription service, MoviePass.  In addition, Spikes is the founder of Urbanworld, the largest international festival dedicated to nurturing Women and BIPOC filmmakers.

Disclaimer: The above press release comes to you under an arrangement with GlobeNewswire. Mango Bunch takes no editorial responsibility for the same.

Celebrate & Rejoice Chinese New Year with the world, Visit Jiangsu in the Year of…